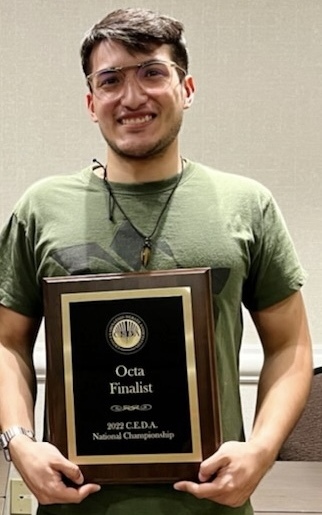 “I am so proud of Luis’ performance at CEDA Nationals, especially given he is a JV Debater, in his first year of competition at CEDA,” debate coach Professor Christopher Langone said. “Oakton Debate is on the forefront of elevating the competitive opportunities for debate at the community college level.”

Prior to coming to Oakton, Langone was the Assistant Director of Debate at Cornell University, and helped coach the team to its title of the Number 1 debate team in the world in 2013. “I have a big vision for Oakton Debate, which I believe will be a leader among community colleges in debate at the national level,” said Langone.

“This year of debate has been a big game changer for me and has given me many opportunities I would never have been able to access without playing up and doing all the work,” said Luis Toro.

-Submitted by the Oakton debate team