General, with all due respect… 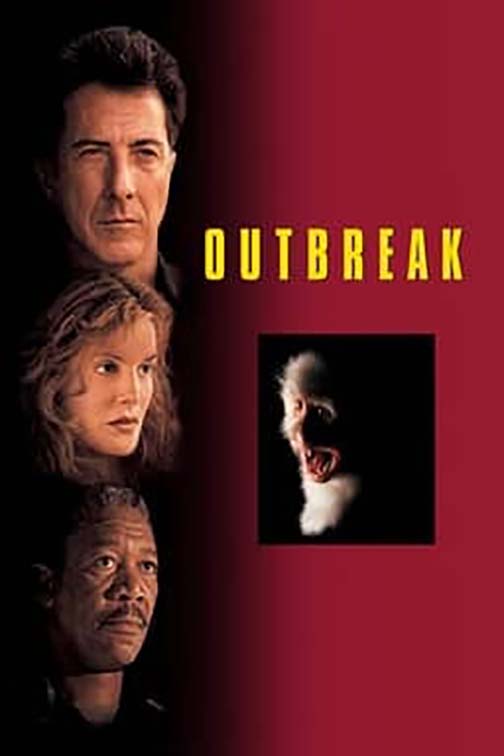 With all the quarantining that has been going on around the globe, I thought it would only be appropriate to review a film that has a similar plot to what’s happening in all of our lives right now. Although it’s not very realistic, the film “Outbreak” has a very interesting plot that keeps you into the movie the whole time. Director Wolfgang Peterson turned a classic design of a disaster movie and turned it into a classic movie that has both action and drama.

While the plot of the movie is fairly unrealistic and definitely has plot holes, it’s the unrealism that makes the movie so interesting to watch.

The movie stars Dustin Hoffman as Colonel Sam Daniels who’s a part of the United States Army Medical Research Institute of Infectious Diseases (AMRIID). Hoffman gives an excellent performance and is perfect for the role because he plays a doctor in the army, not another soldier. So his stature fits him perfectly in the role. He really gives off the impression that he’s an underappreciated doctor who knows what he’s talking about, which is what most protagonists of stories are like.

The story starts off with Daniels dropping his pet dogs at his ex-wife’s house (Rene Russo). There is a short exchange between the two to show they still have feelings for each other, but they fight anyway. Daniels and his team land in Zaire, Africa which is currently known as the Democratic Republic of the Congo.

In Zaire, they are investigating a virus that killed the majority of a small village in less than two days. At first, Daniels believes the virus worked so fast that it couldn’t spread outside that village and the case was closed.

Daniels had a hunch that this virus wasn’t done yet, and urged his commanding officer, General Billy Ford (Morgan Freeman), that he should investigate further. Ford refuses and sends him on another investigation.

Meanwhile, the host organism of the virus, a monkey, is captured to be sold as an exotic pet and begins spreading the virus throughout a small town in California, and a small area in Boston. The top generals in the military discuss potential ways to stop the virus. They bring up a method they used in 1967 for the exact same virus. They used a nuclear bomb to vaporize the entire village and eradicate the virus.

At least in our pandemic, the Government truly is trying to eradicate the virus rather than use it as a biological weapon.

They withhold information from the president in order to secure the virus to be used as a bioweapon. Then they plan to use the same plan as 1967 to wipe out the virus after they’ve secured samples of it.

Daniels and the rest of his team meet up with the CDC and his ex-wife against direct orders in order to stop the virus in this town from spreading and to discover a cure. Major General Donald McClintock (Donald Sutherland) wants the bioweapon and tries to stop Daniels the whole time from discovering a cure so he can use the nuclear weapon on the town.

The Army holding the town in quarantine is given the orders to go ahead and start dropping the bomb on the town. With his ex-wife now sick with the virus, Daniels has a race against time in order to find the host of the virus, the monkey, and create an antidote before it’s too late for the town or his ex-wife. The whole time he’s on this mission with a member of his team, Major Salt (Cuba Gooding Jr.), the Army is hunting him down for disobeying orders.

The plot makes for an interesting film, and the actors all fill their roles perfectly. There are a few unrealistic portions of the movie, however, that are blatantly obvious.

For one, the Government in the movie ignores Daniels’ warnings about the virus. They think it’s no big deal and then surprise, it is a big deal all of the sudden. It’s a bit cliche and typical of Hollywood to do something like that.

Daniels also gets away with a lot of stuff during the movie he wouldn’t get away with if this were real. When he is sent to New Mexico, he tricks a Sergeant into letting him take a helicopter to California to help the CDC. In real life, if the Sergeant saw that he was supposed to go to New Mexico, which he did, he would double-check with whoever gave Daniels the order if it changed at all before allowing him to go to California.

At another point in the movie, the Army is trying to keep everyone from leaving the town. The townsfolk don’t agree and try to leave anyway. Two pickup trucks make a break for the woods where the Military vehicles can’t follow.

The Army vehicles follow the pickup trucks and a helicopter flies in front of them to stop them. Three men in the first truck keep going even after being warned they will be fired upon. The three men’s response is to pull out a single hunting rifle and take out the helicopter. The helicopter responds by shooting the truck until it completely explodes in a huge explosion.

Any person with two military vehicles following them and a military equipped helicopter in front of them would not act like this. If any sane person had this much firepower pointed at them they would back down immediately, they wouldn’t fire back with a simple hunting rifle. The second truck was full of children and they kept trying to drive through all the blockades and get out of town.

The whole evil General concept is also absurd. No General in the United States Military would put creating a bioweapon over the lives of over 2600 American citizens. The General near the end of the movie tried to drop the bomb on the town even after there is news of a cure, all so he can have his bioweapon.

When you think about it, there are some key aspects of the movie that aren’t very realistic. It is, however, still a great movie to watch and kill time during isolation. It gives us a great what-if scenario regarding nuclear weaponry, and kinda just blows the whole virus out of proportion making it fun to watch.