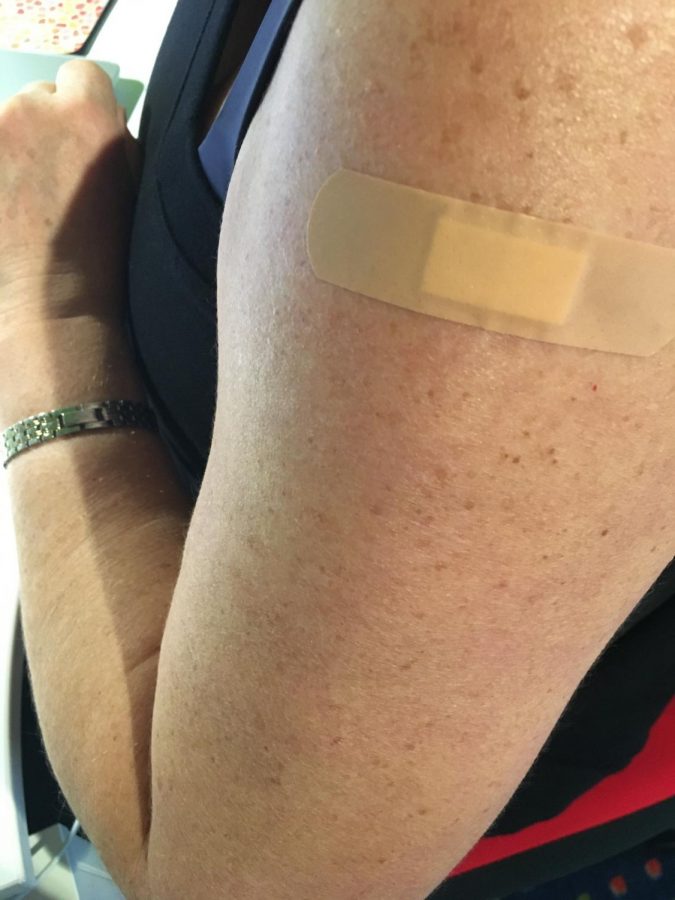 A patient following a flu shot at Walgreen's walk-in clinic

According to the Center for Disease Control flu season in Chicago begins in October and lasts through December and sometimes into February. Although it may seem like a harmless virus the CDC notes that an estimated 56,000 people die each year from the flu or its symptoms.

“The temperature dropping and freezing weather makes the human body more susceptible to viruses which leads to the annual spike in cases of Influenza around this time of year,” said Kathy Lawrence, a nurse, “unfortunately, schools and universities get hit especially hard because of how many people come and go each day.”

Protecting oneself from germs and viruses like the flu can be difficult but is manageable when properly educated. “Washing your hands is the number one most important thing that somebody can do to stay healthy,” said Lawrence, “if you touch any surface that is shared at a school, you should always wash your hands after.”

However, a virus like the flu takes more than just a casual hand-washing to stay away from.“A flu shot is really the only guaranteed way to avoid the flu all year,” said Lawrence.

Most colleges require some proof of vaccinations but a flu shot is usually not one of those. Colleges often support flu vaccine awareness including Oakton which last year held a flu vaccine clinic at the Skokie campus. Despite schools’ efforts to help students get vaccinated, not all are so willing to take part.

“I don’t really get sick even when I don’t get a shot,” said student Jonah Goodman, “I got one a few years ago and haven’t gotten another, but I haven’t had the flu since I was a baby.”

Goodman acknowledges he is putting himself at risk but doesn’t worry too much. “Until I get the flu again and am reminded of how much it sucks, I’ll just keep doing what I’ve been doing,” said Goodman, “I also hate needles.”

Other students take a more proactive approach to their health. “I get a flu shot every August or September,” said student Jenni Palillero, “they’re really easy to get if you just go to Walgreens or any other walk-in clinic.”

According to the CDC walk-in clinics and pharmacy vaccines are perfectly safe and will keep you just as healthy as a flu vaccine from a physician.

“I want to be a nurse myself and just think it’s important for me to stay healthy if I want to help keep others healthy as well,” said Palillero, “at a school like Oakton, everyone should get a shot because you can never tell who might have the virus but not show symptoms.”